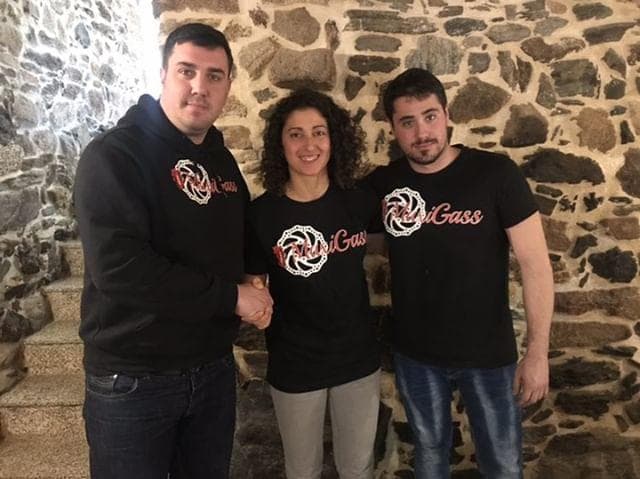 Elena Rosell is one of the stars of International Women’s Motorcycling. Born in Valencia, she participated in the Moto2 World Championship.

This year she competes for the MaxiGass Motos team in Madrid. The team also competes with Javi Orellana in the ESBK Supersport.

Elena Rosell, everyone knows you for having participated in the Moto2 World Championship. Your memory of that period?

“The truth that I have memories of all kinds, at a sporting level was a hard experience because to get to the Moto2 category where the best Moto3 riders have made the jump and where there are also many riders who do not have a place in MotoGP, that the category has a brutal levelazo. And landing there without knowing the circuits and with only a year to be able to do results was very difficult to assimilate. But honestly at the experience level, it made me improve a lot as a driver, trying to cut differences with the first ones I had to apply myself and I improved a lot, although it was difficult to compete almost knowing that I would not continue from the beginning the following year because I did not have the budget for it. In spite of everything, the personal experience was great and I keep great memories of that season both on the track and outside of it, sharing moments and experiences with the team race by race.

What did not you have to be able to go to the points or do more?

“Well I came to compete in the Extreme1000 Spanish Championship and the truth was that I was improving and doing really well, which helped to have that opportunity to make the World Cup, although of course the category, mount and circuits was all new to me, and how I say in a category where in that year it was the tightest.

I remember going out on Friday to the first free without references, with everything to learn and others were already rolling at a record pace, so it was not easy, but I always tried to give my best.

The bad, or good either bad but perhaps what was missing was a real opportunity, the support of the sponsor to be able to continue another year at least and thus be able to return to the same tracks, see my evolution and above all to be able to compete without pressure”.

The best moment of your career?

“I would not know what to answer, after the World Cup to fight for help to run anywhere was not easy, practically equal to almost my entire career, a roller coaster, but after Moto2, on a personal and sports level was better, stronger, I managed to run in reference teams in Spain with fantastic people who believed in me getting great results together”.

What are your 2019 seasonal goals?

“In 2019 with MaxiGass Motos, people who have believed in my person selflessly, we have created a great working environment and team, and this is the best so that we can squeeze ourselves to the maximum and we can return to the level we had before suffering a strong injury that I have dragged during the last two seasons.

We are currently in the CIV, a championship that precedes the Spanish Championship, although this is our real goal when we have regained the confidence and dead time that we have had to face”.

How are you with the team?

Cool!! They really want to do well as few, we trust each other in everything, both working and in off-track moments, in so little time that we know we have made a great friendship.

Trusting yourself is not difficult when you know who you are, what what you do and how you have had to work so as not to stay at home and get here. But that they trust you is the key to success because that gives you more desire to keep improving and to give them back that confidence. Hopefully we can extend our adventure together for much longer!

In Italy everyone looks at Spain as the land of female motorcycling. Are there problems in Spain too?

Well I remember a few years ago, which was rather the other way around, in Italy they did a women’s championship with a large grid of both 600 and 1000 drivers as well as a European championship, which in its last appearance and unique in Spain in In 2008 I won over the Albacete circuit.

I remember Polita, Cazzola and some other girl who excelled in Italy and who followed because they managed to perform at a great level. But since then it is true that now in Spain there is much more quarry in general, more schools, so there is also more girls than from small are doing motorcycling their sport, looking for a future livelihood as any riders. But that does not mean that we are still a world that the support and confidence that women are given without condition to be asserted be equal.

How do you see the future of women’s motorcycling?

“As I say when I started at speed, for example, in Spain I was almost alone, then María, Ana, Judith, Estefanía, Rosa and many other girls… Also thanks to evolution of the world itself, of thinking and of everything, of having Ana and María, for example, now as references in the World Cup, causes many girls to be reflected in them. But above all it makes the parents who in the end are the ones who drive us and support to continue on this hard road see that yes you can.

We hope can go far and assert themselves, although logically until the female participation in the grid is much wider will be difficult, but not impossible!”

0
0   0
previous Alexia Gallardo "My dreams are Ama Supercross and Night of the Jumps"
next Reema is the first woman of the Saudi Arabian Formula 4 driver.