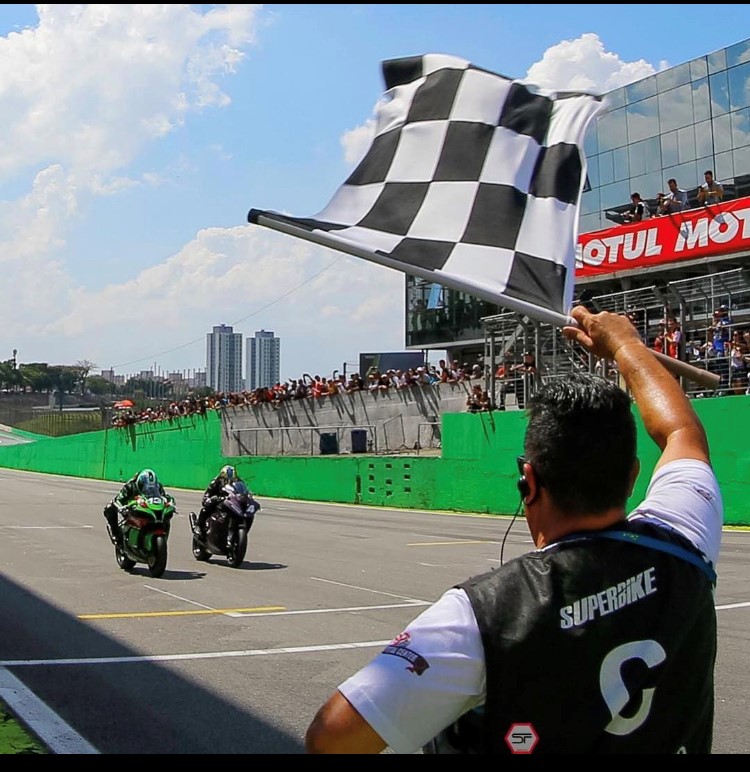 The Kawasaki Racing Team Brasil and Anthony West arrived at the Interlagos Circuit outside Sao Paolo, Brazil on Thursday morning.  Ant and the team had a full schedule of testing prepared but mother nature had other plans.  Light rain fell from the sky all day and dampened the track—not wet enough for rain tires and no dry line for slick tires—the entire test program was scrapped.  The testing would have to wait until Free Practice 1.

Friday would see the team struggling with various electronics issues that were upsetting the bike on corner entry and not allowing Ant to be able to relax and go as fast as he wanted.  The team worked together to come up with electronic strategies and chassis settings that would allow Ant to extract all the performance out of the Pirelli control tires.  The hard work of the crew and Ant’s riding abilities were rewarded on Saturday with a front row start in position three on the grid.

Sunday morning arrived with clear skies and warm temperatures.  By the time the lights went out at the start of the race, the air and track temperatures were hotter than the team had experienced all weekend.  Between the demanding track layout of the circuit at Interlagos, and the highest temperatures the team had seen all weekend, tire wear was on everyone’s mind. Ant was going to have to ride the bike without traction control and the team was never able to complete a race simulation on Friday or Saturday to check for tire life. Ant was able to get a great start and lead the field into turn one with Alex Barros right behind him.  Polesitter Eric Granado had a problem off the line and pulled into the pits with a mechanical failure.  That left just Ant and Barros to battle with each other over the entire race distance, swapping the lead multiple times while leaving the rest of the field in their wake.  When the checkered flag flew, Ant crossed the stripe first with Barros alongside him.

That was fun.  From not being sure if I was going to be able to race this year, to standing on the top of the podium in my first race in the Brazilian Superbike championship, I couldn’t be happier.  We lost a whole day of testing to the weather, we struggled with electronic issues, setup issues, and I injured my foot on the farm back in Australia.  We just kept working and steadily made the bike better.  It feels great to win a race and I can’t wait for the next round of the championship.

previous Anthony West "I can’t keep my mouth shut anymore. Here is a story for those who don’t understand what lies behind FIM..."
next Cirano Mularoni “We have won the wrong Championship with Aoyama. Sentenced to closure...